Defying the Rule of 3’s.

That’s what the SAR Dog Teams in Haiti have been doing for the last week. As SAR professionals we are taught the “Survival Rule of 3’s” as a part of our basic training. That rule says that humans can go:

3 minutes without air
3 hours without shelter (from harsh or life affecting elements)
3 days without water
3 weeks without food
3 months without hope
Common wisdom would have said that victims buried under the rubble of Haiti’s tumbled buildings would have run out of water and time Friday or Saturday. Amazingly enough people were located and pulled out by SAR Teams on Saturday and Sunday and beyond. They may be without water, they maybe without food but they certainly are not without hope.

Fully a week after the massive quake that shattered buildings, lives and families, SAR Teams and SAR Dogs have continued to search – determined that no one will be left behind if they can help it. We have seen incredible video and newscasts from CNN and other news media outlets highlighting the Handler & Dog Teams who have continued to work endlessly to find victims still buried but alive.

Sunday’s rescue of a woman from beneath the hotel she had been staying in elicited chanting of “U.S.A., U.S.A., U.S.A….” from the surrounding crowds. How emotional must that have been for the California Team that had made the rescue?

This rescue was then followed by the rescue of 3 more victims buried 3 floors deep in another collapsed building. The dogs were brought in to confirm what electronic equipment had indicated – that there was still life inside the collapsed heap. The dogs said “yes!”. And indeed, they were right! Dog and handler went in and located the woman in very tight conditions and she was pulled to safety.

The mission of the SAR Teams and the Dog Teams will start winding down now. We are 10 days into this disaster and sadly it is inevitable that this response will begin to transition from rescue to recovery.

But how brave of the dogs and handlers to keep working, day after grueling day. Hope is still large in their hearts and it gets them up every day and gets them back in the rubble to search. They are saving lives and changing history, over and over again defying the Rule of 3’s. 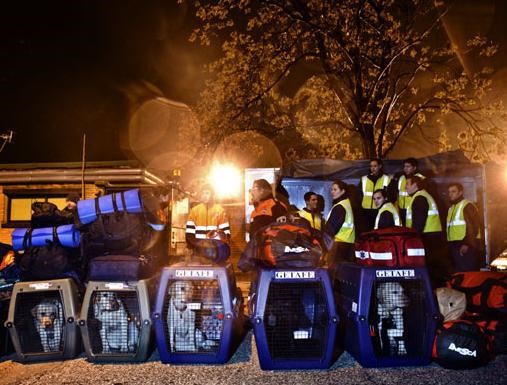