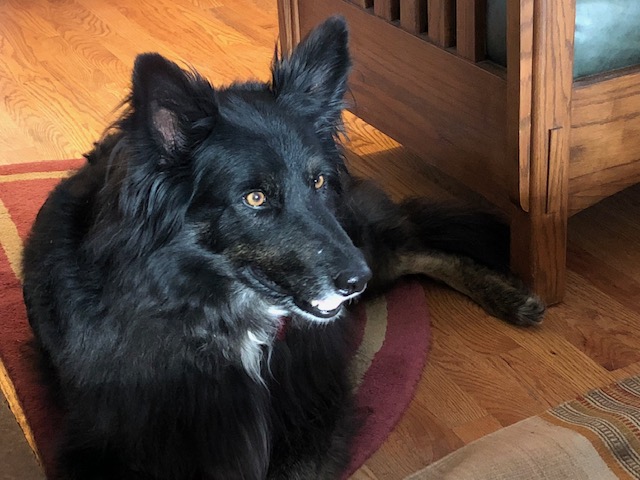 On a sunny Colorado day in 2011 a kind of goofy looking puppy came home with us from Denver’s wonderful Dumb Friends League animal shelter. We named him Mac.

My partner had been a volunteer with DFL for years – and not once in all that time had she even suggested adopting a dog that she had been working with. Not once that is, until she met a funny looking Border Collie cross pup that she had begun to fall in love with.

Over the course of a couple of days she came home and mentioned again and again that she was working with a “really great border collie mix pup”. I didn’t pay much attention at first, he was just another one of the dogs she was working with. But she kept talking about him – that was unusual.

At the end of the week she came home and said “Look, we have to be at DFL in the morning when they open, Mac will be up for adoption and I want you to look at him and decide if we should adopt him”.  I somehow knew we would be coming home with him . . . she had already named him, hadn’t she?

His adoption papers said he was a Border Collie mix, that he was 10 months old and that he’d been placed several times already. The fact that he was up for adoption at DFL after having had a few placements already was a little off-putting – but although he was a little stand-offish he played well with our other dog that we’d brought along to check him out and he seemed friendly enough to me.

Personally, I thought he was an odd-looking pup. He had a pointy little face and his legs were too long for his body. His tail had almost no hair on it and he held it in a curve over his back – a “gay tail” as they say in the dog show world, and he had strange, wild-looking copper colored eyes. 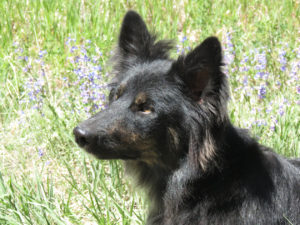 But she was in love with him and so, he came home with us.  And then the guessing game began – just what mix of breeds made up our odd-looking boy?

While obviously he had a lot of Border Collie somewhere in his lineage his head had a bit of a “foxy” look to it. His body was wide and stocky on long skinny legs. His coat was soft, mostly black with some tan tipping and a white chest patch.  His lower legs were a brindle color.

But what was most striking about him were those copper colored eyes – which gave him a wild, feral look.  Where did those come from? An experienced dog-handler friend of ours, seeing Mac for the first time asked with all seriousness, “Are you sure he’s not part coyote?”.  Truthfully, we didn’t know. 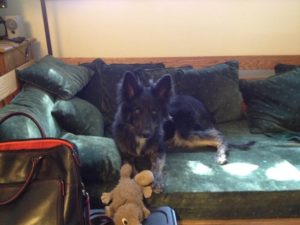 At home Mac got to know us and we got to know Mac. He had some interesting quirks we had to learn to live with. Mac turned out to be a dog who, while fine with us and our other dogs, was fearful and cautious around dogs and people he didn’t know. It takes him a long time to warm up to new people in his world – but once he does he is accepting but aloof. He never does well with strange dogs.

And we quickly found out that Mac was a barker. When he’s bored or needs something he has an obsessive, high-pitched bark that he continues until he gets what he wants. We have never managed to curtail that behavior – it’s his hallmark.

He also turned out to be a highly intelligent dog – at 10 months old he arrived at our home with bullet-proof “sit”, “down” and “come” commands (we learned he had been in a prison obedience program before he came to us). He learned new behaviors with only a couple of practices and he figured out “problems” all on his own. I’ve come to believe that he’s the smartest dog I’ve ever lived with – and I’ve been blessed with some amazingly intelligent dogs in my life.

He is fast, athletic, with a high prey drive. He’s territorial, growly and pushy. He is also a comedian, engaging in goofy little activities that make us laugh. He quickly adopted one small stuffed ducky toy as his favorite and has carried it lovingly around the house now for 7 years – all other toys he tears to shreds.

As Mac grew up we continued to wonder what his genetic background was. His ears had that nice Border Collie feathering but they didn’t quite set on his head the way a BC’s would. His hair grew out and he has nice, pretty feathering on his legs and curly tail. His gums are black, although he has a nice pink tongue. 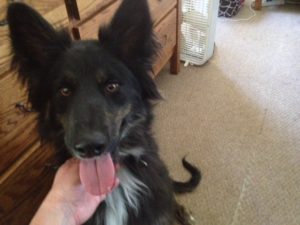 He has a compact, muscular torso that is a little out of proportion to his long legs. His trot actually looks a little ungainly – but when he runs he is swift and agile looking.

My guess for a long time, based on those black gums and his brindled legs was that maybe he was part Dutch Shepherd. But there was no way to know short of doing a DNA test on him.

Canine DNA tests were becoming a “thing” when we first got Mac, but the reviews in those early days of dog DNA testing were not good – there were so many reports of obviously incorrect results that we didn’t even seriously consider doing a DNA test on the boy. It seemed like it would be a waste of money. 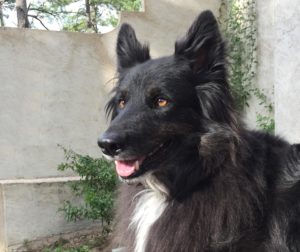 But we didn’t stop puzzling over his ancestry. In fact, our curiosity only increased as Mac grew into a really handsome and unique looking adult dog.

Then finally, this summer I decided to look at all the canine DNA testing kits again. More current reviews of results were much better than they had been in the past. I researched all the available canine DNA services and there were several that I would have felt okay about using – but I finally settled on an Embark ® test mainly because they advertised that they could test for wolf and coyote mixes. I wanted to get to the bottom of those feral looking copper colored eyes if I could!

The kit arrived, we soaked up a swab of Mac’s saliva and sent it off in the mail. Six weeks later we got an email – Mac’s results were in. I couldn’t wait to log into the Embark website to see the results and to finally answer the question of “what the heck is Mac?”. I was half-afraid that the results would seem totally off base and that our questions wouldn’t be answered at all. I was, truthfully, afraid we’d be disappointed.

We were not disappointed. In fact, the results, while pretty mundane in black and white, are fascinating to us when interpreted through the existence of Mac the dog.
The results showed that Mac is 36% German Shepherd Dog, 27% Border Collie, 25% Australian Cattle Dog, 8% Chow Chow and 4% Collie.

I lived with German Shepherds for many years – and I have to confess that I never would have guessed Mac had that much GSD in him. He has petite paws, unlike the large paws of a German Shepherd and his ears and body are not those of a GSD. But his coloring could definitely come from a GSD ancestor. His adult coat is largely black on top, his face is dark with a sprinkling of tan hairs and his legs are a tan and black brindling.

We were already sure of the Border Collie ancestry – he looks more like a BC than anything else. His soft long hair, feathering and pretty white chest patch all show his likely Border Collie heritage. He is mostly an upright dog but when he is stalking a bird or rabbit he goes into an unmistakable Border Collie crouch. He’s a BC alright.

In doing a little research on Cattle Dogs, I found numerous comments about Cattle Dogs and their “high-pitched” “obsessive” barking. Yes, that’s Mac, and that may be his most prominent Cattle Dog trait, except for. . . wait for it. . . Those amazing copper colored eyes! A little further research on blue coated Australian Cattle Dogs, otherwise known as Blue Heelers, came up with the interesting note that blue coated dogs can often have uniquely copper colored eyes!

Mac’s DNA results show that he also has just a bit of Chow Chow in his background, but that trace amount probably explains his black gums and proudly curly tail.
So now we know. Mac’s a bit of a jigsaw puzzle dog. We have had a great time trying to put those puzzle pieces together to match looks, personality quirks and behaviors to his ancestor breeds.

But in the end, it’s a fun and interesting exercise but not that important. Mac may be the result of a random combination of several ancestor purebred dogs – but at the end of the day, he is his very own breed of dog. Vocal, quirky, comical, smart, athletic and handsome – he is like no other dog I’ve ever known. He is just our own, very unique, Mac. 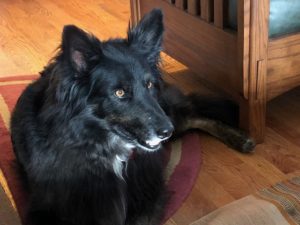 What is important though, is to think about the long road of dogs that came before him and contributed to making him the dog he is.

Generations of people and dogs together, each living with each other for a purpose. Someone in the past wanted and needed a German Shepherd Dog, with all their strength, courage and tenacity. Another wanted a Border Collie with for its intelligence, quickness and agility. Yet another wanted an Australian Cattle Dog for work ethic, loyalty and alertness.

Our partnership with our dogs is ancient, beautiful and multi-faceted. No two dogs are alike, even in purebred dogs bred for certain looks or traits. That’s why each dog is a joy unto himself for a loving and appreciative human. That’s why every relationship between a dog and their person is unique and custom made.