Sadly the time is growing increasingly short for the SAR Dogs working feverishly in Haiti to locate “live finds”. As we know, disaster trained search and rescue doges from around the globe have been recruited and deployed to Haiti to aid in rescue operations in that earthquake-ravaged island nation. This deployment of SAR Dogs may be one of the largest in history – mirroring the overall massive scale of effort being expended on behalf of the people and victims of Haiti.

I’ve been monitoring the news releases and blogs over the past few days for mentions of SAR Dog Teams and handlers and the numbers of teams deployed and the stories that are coming out takes my breath away.

French teams deployed with handlers and dogs so keyed up that a local journalist noted how the dogs were excitedly jumping on their leashes in the apparent anticipation. (Imagine the adrenaline running through those teams as they boarded their planes!)

China dispatched a chartered plane with SAR Dog Teams and 10 tons of tents, food and medical equipment. A solemn and intense ceremony was held at the Beijing airport before the teams left, with handlers and their dogs lined up, equipment at the ready. I wish I could find some video of that moment – I’m sure it was truly an amazing moment, don’t you?

Reports from Russia advised that a team from the Russian Ministry for Emergency Situations (EMERCOM) sent from Moscow contained 22 rescuers in total. Among the team were eight doctors, two psychologists and six search dog teams including 3 Labradors, 2 golden retrievers and a German shepherd.

Search and rescue dog teams from France, Peru, China, Taiwan, Mexico, and Britain also were reported to have arrived in Haiti ready to work.

On Wednesday, January 13th, a Spanish Team traveled to the Dominican Republic on their way to Haiti. The team consisted of 10 handlers with 4 search dogs. Here is a wonderful photo I found of their transport staging area. 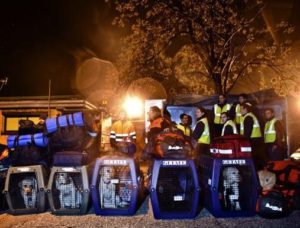 Britain’s international development minister, Douglas Alexander,  reported that a 64-member team, including search dogs, left for  Haiti from London’s Gatwick Airport, and dozens of other countries, including Spain, Iceland, Canada, Germany, Venezuela and more pledged to send rescue teams,  doctors, cash and supplies. Most are already on the scene at the Caribbean island.

I am proud to report that the U.S. was among the first to help by initially sending two FEMA 72-member search and rescue teams with search dogs to help dig out survivors.  Additional FEMA Teams were deployed in the days that followed. Saturday afternoon, one of these teams were brought in to verify the presence of a survivor when tapping was detected under the rubble of a daycare center. CNN’s Anderson Cooper and his camera crew were also on the scene doing a live report as the search dogs showed interest in the area. Sadly, after searching for almost eight hours, the team from the L.A. County Task Force determined that no one was alive under the concrete.

I am in awe of the degree of human and dog power that is deployed in Haiti a this moment.  But sadly, as I noted earlier, time is running out.  While there are instances of people being trapped under rubble for very long periods and still surviving – that is not the norm.  And the wonderful dogs deployed right now are by and large, trained for “live find”.  As the living buried victims they find become fewer and fewer it grows harder and harder on the dogs both mentally and emotionally.  They don’t like finding deceased humans – it’s hard on their souls.  And be assured these dogs have souls just like their handlers.  This work is good for the soul when live people are rescued – it is hard on the soul as those opportunities become fewer and fewer.

Please remember our first responders and their wonderful dogs over the next few days – and when they come home, if you can, please make sure they receive a “Hero’s Welcome Home” in their communities.  They deserve it. 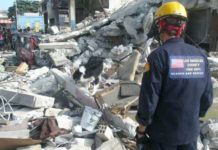